Llandovery College marked Anti-Bullying Week with a packed programme of fun and meaningful activities. Running from 12 – 16 November, this year’s theme was ‘Choose Respect’ and one of the priorities of the campaign was to show that bullying is a behaviour choice and that children and young people can set a positive example by opting to respect each other at school, in their homes and communities, and online.

The College prides itself on being an inclusive and caring community and the Warden’s Assembly on Monday morning, with bullying as its theme, set the tone for the week. There was a brisk take up of anti-bullying wristbands and ‘Odd Sock Monday’, celebrating the fact that everyone is different, proved a great deal of fun and the subject of much comment!

Other events included a talk by PC Kevin Jones on cyberbullying, a topical and important issue. Members of the School Council gave an anti-bullying presentation to pupils during which they spoke about experiences of bullying, how it can be recognised and that it is the responsibility of all whether they are the subject of the bullying or not to put a stop to it. On a lighter note, there was some jostling between pupils to release balloons with messages such as: ‘be a friend’, ‘tell a teacher’, ‘everyone goes through storms’, and ‘think about this.’

On Thursday there were opportunities in each of the Houses for pupils to discuss issues raised throughout the week and there was also a Warden’s Post Box in which pupils could leave notes anonymously with their thoughts/experiences on the subject that the Warden would address at the following week’s Assembly. The College tower was then lit up with the anti-bullying logo to ensure everyone passing by saw the message.

The College finished the week with ‘Friendship Friday’ where each and every pupil met someone new and got to know a little about them. A bake sale was also held on the day and all monies raised from that along with proceeds from the sale of wristbands and ‘Odd Sock Monday’ were donated to Children in Need.

All in all, this was a very successful week where the message of ‘Choose Respect above Bullying’ was clearly and emphatically delivered. 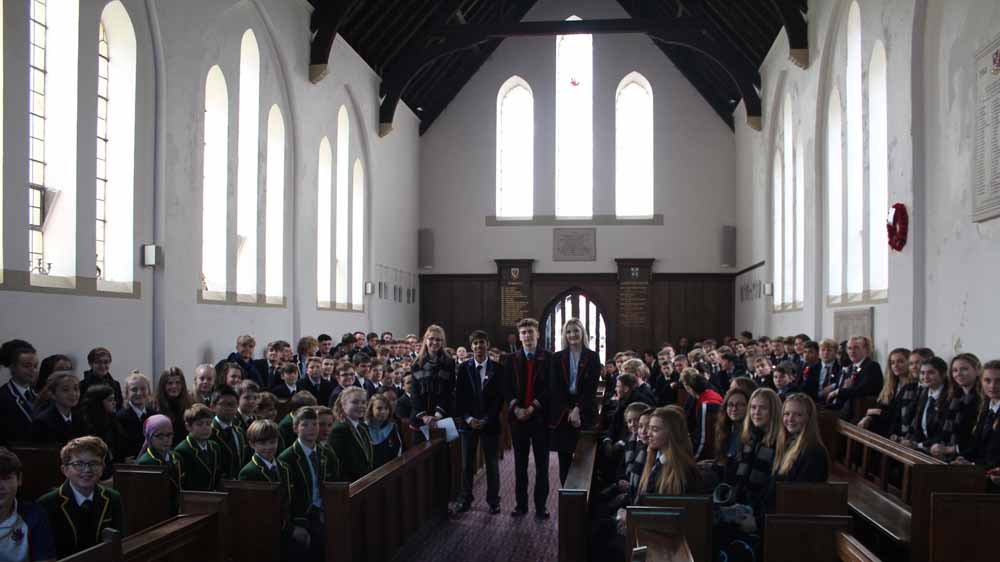